The industry-standard TimeLord-Net Master Time Source has been re-designed and re-engineered to take advantage of the latest advances in technology. It is now modular in design and provides a complete precision time synchronisation solution for computer networks, CCTV security, CCC/C3, digital clock systems, analogue clocks (with hands), industrial process control, voice recording and many other applications requiring accurate time synchronisation of equipment. It supersedes the previous TimeLord-Lite range providing extra functionality at a lower price.

The TimeLord-Net may be used in stand-alone mode, deriving its timekeeping from its accurate, high stability, internal crystal oscillator or, for ultimate precision, synchronised via optional receivers to GPS satellites or DCF and MSF terrestrial radio time code transmitters.

The TimeLord can be synchronised to any of the following Time References Inputs as standard with the appropriate receiver head:

The TimeLord provides the following Data Output Interfaces as standard:

OVERVIEW
The NEW Timelord-Net NTP Master Time Source is housed in a 1U high 19″ rack mount case and provides time data outputs for computer networks, digital displays, analogue clocks (with hands) and virtually anything that requires an accurate time-stamp. A 2-U version is available to accommodate additional optional input and output modules. The high-visibility 6-digit red LED display can show time or date, has adjustable brightness and can be read at distances of up to 7m. The TimeLord-Net is delivered pre-programmed with a 256-year calendar that includes daylight savings changes for all the 90+ Time Zones worldwide – plus custom time zones can be manually programmed if required. Programming is simply accomplished via an intuitive setup menu, using the 4 buttons on the front panel.

TIMEBASE
The internal, high stability, TCXO Temperature-Compensated Quartz Crystal Oscillator typically provides an accuracy of ±0.1 seconds per day @ 0-45°C (approximately ±2 seconds per month). The free-running accuracy of the oscillator is automatically trimmed over a long time period when the TimeLord is referenced to an external atomic reference to further improve the free-run accuracy. With the optional TCXO-HQ installed, the free-running accuracy is further improved to typically ±0.01 seconds per day @ 0-45°C (approximately ±0.2 seconds per month = ±2½ seconds per year approx) When synchronised with the GPS satellite network via the optional V-488C.00 GPS receiver system, the RS232 level 1PPS ‘on-time’ pulse is maintained typically within 10µS of UTC. When synchronised with DCF or MSF Radio Time Code Transmissions, via an optional V-484 series time code receiver, the Timelord-Net output signals are maintained within 30mS of UTC. When synchronised to an NTP Time Source (setup as an NTP Client), the Timelord-Net Time Source output signals are maintained within 1-10mS of the NTP Source depending on network delay and jitter.

The TimeLord-Net Master Time Source has a 250-year internal calendar with 4-digit year setting, including for each time zone, offset from UTC and daylight savings change information. A simple “set-once” Time Zone Setup facility for any location in the world is provided, automatically calculating the appropriate time offsets from UTC and future seasonal time changes.

OPTIONAL INPUT INTERFACES
SYNC2-IN allows connection of a 2nd Receiver Head to provide dual redundant functionality. The 2nd Receiver Head may use the same or a different atomic reference and the TimeLord will only change to the backup off-air reference in if the main reference fails and if the backup which is validated during the synchronization process. AF-IN Audio-Input Interface allows synchronisation from a modulated audio time reference, including IRIG-B – commonly-used in industrial, marine and aviation time-keeping applications – and EBU-LTC longitudinal Timecode commonly-used for Broadcast and CCTV/Security. OPT-IN ST Fibre-Optic Input Interfaces allows synchronisation from optically-connected time code signals including demodulated IRIG, EBU and Serial Time data.

STANDARD REFERENCE INPUT INTERFACE CONFIGURATION
OFF-AIR RECEIVER INPUT 2-part terminal block provides twisted-pair interface to Receiver Head and power for GPS (screw terminals – 4-way) and separate RJ45 for NTP-locking NTP NETWORK TIME INPUT An RJ45 connector provides an Ethernet connection for NTP-locking NTP NETWORK TIME PROTOCOLS SUPPORTED STANDARD OUTPUT INTERFACE CONFIGURATION
NTP OUTPUT An RJ45 connector provides an Ethernet connection for NTP output NTP NETWORK TIME PROTOCOLS SUPPORTED RELAY CONTACTS Changeover relay contacts are provided rated at 30VDC @ 500mA. The relay can be programmed by the user to changeover for one second at various repetition rates: The relay can also be programmed by the user to changeover on the occurrence of specific events: V-Code CONGIFURABLE OUTPUT/s (one v-Code output is standard; 2nd optional) Configurable for either 482 15-zone Time-and-Date Code for Digital Displays or as an Intelligent Impulse Output Driver for Analogue Clocks (with hands).
482 Multi-Zone Time-and-Date Code is intended for the control and synchronisation of 400A series digital clocks and time-zone displays showing time and date in up to fifteen different time zones. The data code itself is extremely robust and can be sent many hundreds of metres without problem and comprises an accurate minute-edge followed by a 15-zone “time-telegram” sent every minute. One Timelord-Net unit can control up to fifty V-400A series slave displays located up to 1km from the TimeLord unit using a simple, non-critical, single cable pair. The appropriate UTC offset and all future seasonal time changes are pre-programmed for almost every global location. Up to 50x V-400A series clocks can be connected to a single v-Code Output. 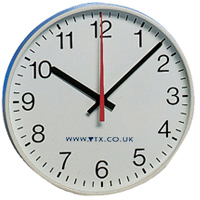 Intelligent Impulse Output Bi-Phase impulses to drive Impulse Analogue Clocks (with hands) can be produced by the TimeLord-Net which automatically corrects for daylight saving changes and also catches up when the mains fails. At setup, all the clocks on the same impulse output are manually moved to show the same time and that time is entered into the TimeLord Master Clock. 3x Forward pulses are then sent from the TimeLord and the wiring to any clock that has advanced by two steps should be changed round to ensure that all the clocks “tick” and “tock” together. The TimeLord is then set to RUN and the clocks on that impulse output either speed forward to catch up, or wait until that time arrives – whichever is faster – before moving forward at normal speed (either 1 pulse per second, one every half minute or one every minute internally settable). If there is a problem with the mains or the clock loop somehow becomes overloaded, all the clocks are stopped together (as opposed to some running and others not as the power reserve dies) and the TimeLord remembers that time.

When the mains returns, the clocks all step forward at fast speed to catch up. It is worth providing a UPS for the TimeLord to keep the impulse clocks running case of prolonged mains failure; the TimeLord’s internal battery maintains timekeeping for around 1 year but outputs are disabled to conserve battery energy.

OPTIONAL OUTPUT INTERFACES
AF-OUT Dual Audio Time Code outputs for EBU LTC TimeCode or modulated IRIG-B
The optional AF-OUT output interface adds two flexible Audio outputs that can be independently configured to provide either 1kHz modulated IRIG-B timecode for the synchronisation of voice recorders, data- logging and distributed control equipment, or EBU Longitudinal TimeCode for use in Broadcast, Secirity, CCTV and other applications. IRIG is normally transmitted as a modulated 1kHz signal at a 100Hz bit-rate and contains day-of-year, hours, minutes and seconds information. EBU Timecode is a self-clocking audio signal at 2kbps with each frame of data comprising 80 bits. Each timecode frame contains time, user information plus count-up and count-down information as well as user-programmable information. The time data includes hours, minutes, seconds and video frames (25 per second) and the user bits allow date and other information embedded within the timecode frame. The date format carried in the TimeLord EBU User-Bits signal can be set to one of two commonly-used standards for Broadcasting. The audio outputs are presented on BNC connectors and the interface is 600 ohm transformer-balanced which can be used to feed both balanced and unbalanced devices.

SER-OUT Dual RS-232/RS-485 Serial Interface (in addition to the in-built serial port)
The optional SER-OUT provides two additional RS232 and RS422/RS485 interfaces each of which can be programmed to provide one of more than 85 different serial ASCII time and date telegram message formats to be selected by the user.
General purpose serial data formats are user configurable for:

DEM-OUT Demodulated Outputs
The optional DEM-OUT provides Quad logic level outputs that can be programmed to mirror either IRIG-B, EBU-LTC, MSF or DCF Timecodes, PPS or other Periodic signals